Learning to take care of myself while traveling

[If you’re a responsible person, this article is not for you…]

Last weekend, I totally neglected myself and my needs while moving to Waterloo, then traveling to New York City. My trip was:

This was a humbling experience for me. I’ve prided myself on being above creature comforts. Now though, I realize I too have some basic comforts I want covered.

Some achievements I unlocked:

In light of this episode, I’ve decided to reflect on taking care of myself LOL

At first, I was confident I hated Canada and New York, because I was so low on sleep. When you’re low on sleep, you get irritable and stressed. You hate everything.

Part of this was me failing to pack and unpack ahead of time.

Another part was me choosing early morning and late night flights.

These flights are usually cheaper. And give you more time to explore a city. So before, I’d just deal with the consequences.

But now, I’ve decided it’s not worth the hit to my sleep.

I flew eight hours, bussed two, then slept six. As a result, I wasn’t paying attention to meals.

In hindsight, I should have bought food at the Toronto airport.

What kept me from buying food?

I didn’t look hard enough to find healthy options. If I looked harder though, I’d find them.

I also avoided buying snacks. I don’t usually buy snacks, but this would’ve been a good place to.

And, I wouldn’t mind unhealthy options. Health is a means to enjoying life, and you can’t enjoy life on an empty stomach!

In the future, I want to be OK with eating at the airport. I’ve pushed myself to eat in the destination city before, and been hangry as a result. No longer.

In New York City, I stayed at a 1 star hotel in Chinatown for only $45 a night: 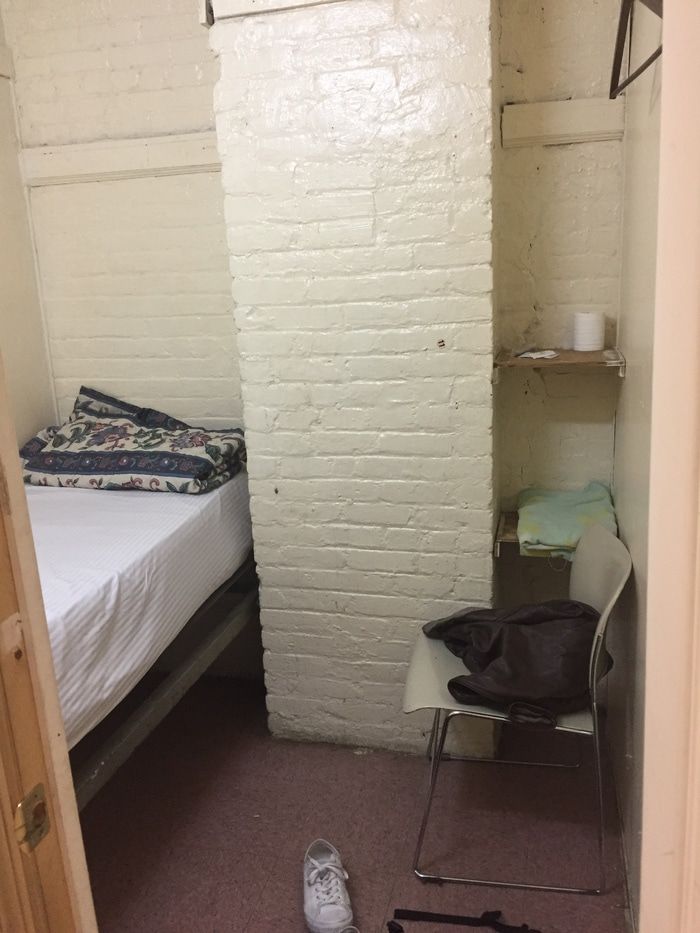 I know I described it as a prison cell, but I didn’t mind much. I was fine with a small space, a hard bed, and a lack of A/C. The lack of A/C could’ve bothered me, but didn’t, because I was mostly out and about.

There were only two showers per floor (15 rooms?). I had to wait 10 mins in the morning. It wouldn’t dissuade me from booking this hotel again.

Sometimes, waiting in line for showers is more of an ordeal cough Coachella cough. There, it might affect what I’d pick for accommodation.

Generally, this taught me I can live in 1-star accommodation without fuss.

If you’re ever tired or sleepy, drink a ton of water. The water will keep you lively.

The hydration stations at UC San Diego have spoiled me. I can always find a station nearby, and I fill up my bottle there.

It’s like the city’s trying to conserve water. Is NYC in a drought or something like wtf

First, when I’m having a meal, I want to always drink lots of water. It’s free, I’ll capitalize on it.

Second, when I’m on the move, I can choose bottled water or tap water.

Bottled water: Rishi, if you don’t have another option, shell out the extra money for bottled water. You pay up for whatever other luxury in your life, but you hesitate to spend money on water? Come on

Tap water: I used to be a bit of an animal and would drink all tap water. Even out of the bathroom sinks. I recently learned that’s not a good idea.

I’m considering investing in a water bottle with a filter in it. This seems like the master strategy to me. Here’s one my friend uses.

When I was in Vietnam, I farted in a tailor shop.

My tailor thought this was the funniest thing. She kept making farting sounds with her mouth to communicate to me that I had farted.

I’m trying not to find myself in these situations again. Thus, I’ve resolved to use the bathroom, ahead of time. ALWAYS

My friends won’t mind. When I do ask to go, often my friends have needed to go too. And have just kept it to themselves.

Even if I don’t have to go.

I bias towards public transit and walking. Because:

The only way to get to know a city is to walk it.
Author Unknown

I generally want to continue that.

But if I’m already tired, or I’m doing a lot of walking/activities later, I might Uber.

After rereading what I wrote, I feel self-conscious. I’ve just converged on what my mom told me to do when I was little. This might just be plagiarism.

I’ve noticed though. As I grow older, I start agreeing with little things my parents have been saying all this while. Don’t stay up too late. Don’t skip meals. Go to the bathroom before getting in the car. Bring water. Put down your phone, look at the view. etc etc.

But then again, where’s the fun in that :)

My internship experiences at Apple, Google, and breakout companies (part 1)

The month before my first internship, I read Alexey MK’s A Brief Guide to Tech Internships. In it, Alexey talks about his internships at Facebook and 2bkco, and what he learned from both. I used Alexey’s experiences as reference all the... Continue →